PLEASE READ ALL THE FOLLOWING INFORMATION BEFORE YOU REGISTER, AS THERE HAS BEEN MANY CHANGES TO THE FORMAT AND STRUCTURE FOR THE 2021-2022 INDOOR SEASON.

Link to register at the bottom of the page.

Aurora and Saskatoon Youth Soccer (SYSI) are pleased to announce a new format and structure for the SYSI competitive leagues, which is more in line with the aspirations and needs of players.

Over the past nine months, SYSI and its affiliated club Technical Directors have studied best practices regarding the formation and placing of teams within our leagues. Many academic studies and interviews with clubs and experts in player development across Canada and other parts of the world produced the following information: 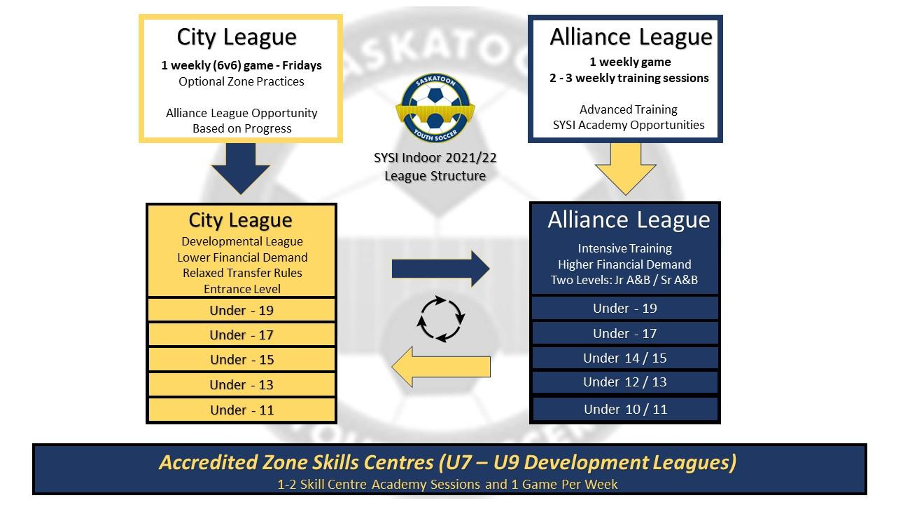 is designed for players who need time to develop, either technically or physically or for those who want to maintain a level of flexibility in their commitment to soccer. It is also a place for beginner players over the age of ten, where they can master the fundamentals before moving to a more demanding environment if the wish.

is designed for players who have a reasonable grasp of fundamental soccer skills and for those who consider soccer their main sport.

U7 and U9 Development League

Aurora will be using the same uniforms as 2020-2021 indoor and outdoor. You will have the option to purchase a new uniform at the time of registration if you have outgrown the last one. All new players to Aurora or if you never played in 2021 you are required to purchase a uniform with your registration.

The week following evaluations we will be offering pre-season training sessions with your age group.    The pre-season will start Saturday September 18 and run until the Indoor season starts (weather permitting).

Refundable volunteer deposits are returned after each of the Aurora Soccer Tournaments and at the end of each of the soccer seasons once a 4-hour volunteer commitment is satisfied.

Ways in which your refundable volunteer deposit is refunded:

Why are there two separate leagues?

Saskatoon Youth Soccer has moved to the two-league format to provide a wider range of options for youth soccer to meet the different commitments desired by different players.

The City League is a lower financial and time commitment. It is good for players who have another primary sport/activity, want to play for fun, or are new to the sport. The program consists of               one game per week, and zones may provide additional training opportunities.

The Alliance League is for players who have soccer as their primary activity and want to play competitively. There are more opportunities for development and as a result the time commitment is greater. It is similar to our current club program with one game and two practices per week. The Alliance Academy provides an additional practice each week. Players are expected to be committed to the program.

Why has the cost increased?

Costs are based on fees that the zones are required to pay to Saskatoon Youth Soccer. The new structure includes more field times, resulting in a higher cost. Fees also cover other costs that Aurora incurs in running the programs such as paid coaching staff and equipment.

Why do I have to purchase a uniform at an additional cost?

The cost of the uniforms was previously built into the registration cost. The decision was made to separate the costs of uniforms from registration in order to minimize the costs to families wherever possible - if you have a current uniform that still fits you do not have to pay for a new one. Due to this change you are required to provide your correct uniform number during registration.

Do I have to register for the Alliance League and Alliance Academy?

The Alliance Academy is a separate registration and program as it is run by Saskatoon Youth Soccer (it is city-wide, not zoned). Participation in the program is tryout driven, but players must also be registered in their zone Alliance League to be eligible.

Can I play in the City League and tryout for PSL?

No - Players in the City League will NOT be eligible for PSL the following spring/summer.

How do I register for the Alliance Academy?

Registration is done through the Saskatoon Youth Soccer website.

Can my kid switch between Alliance and City leagues?

Will a refund be offered switching from Alliance to City?

Yes, you will receive a refund in fees based on the difference in cost if you move from the Alliance league to the City League

Is there a cost to switch from City to Alliance?

Yes, you will have the pay the difference in the fees if you move to Alliance league from City League

How will teams be formed within each age group?

The intention in the Alliance Leagues is to have teams based on one-year age groups (junior and senior teams), rather than two-year age groups.  For example, after evaluating and selecting players and forming teams, ideally a zone would put in a 2011 and 2012 team within the U11 age group.  However, teams could end up consisting of majority 2011, with some advanced 2012 players.  Conversely 2012 teams could have 2011 players to provide for additional development opportunities. If numbers do not support two teams (junior and senior) the technical staff can choose to put a single team in either the 2011 or 2012 league with players of both ages. This will apply to both A and B divisions within the Alliance League.

The general idea behind these decisions is creating environments to develop all players the most beneficial, fun way possible, while following long term player development.

If you have any questions, Please email the Registrar at registrar@aurorasoccer.ca

Manage your identity from the palm of your hand to the top of your desk.